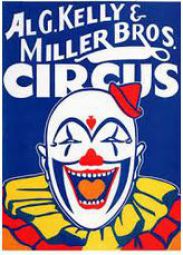 My father, Johnny Flinchpaugh, had bought and sold animals with "Miller Brothers Circus" later to be known as "Carson and Barnes." (Kirksville, Missouri in the 1930's)

As a small child in the 1950's, my father would almost always take me (Larry Flinchpaugh) to their circus when it was no more than about 100 miles from St, Joseph, Missouri.

One of my favorite activities when I was a kid was putting on a neighborhood circus. They always seemed to be at my house so I must have been the ring leader. We’d hang two blankets on a clothes line with safety pins and open them in the center when the show was to begin. Every kid in the neighborhood would bring their dogs, each dog being able to perform one trick, such as “sitting up“ or “rolling over“. Before long my dad was bringing home animals from our pet shop to perform in the circus, I especially remember him bringing home a monkey. That really went over big with the other kids.

Although I didn’t realize it at the time, I had some wonderful experiences with animals in my childhood. My father had always loved animals and I remember him telling me stories of his childhood. He would take the wooden boxes cheese came in and make them into miniature circus wagons. He would attach four checkers for wheels and add bars on the open side of the box. I would guess that he used nails for the bars. He pretended that the mice caught by the field hands were lions and tigers.

In 1932 after growing up he opened the “Plainview Wild Animal Farm” in Kirksville, Missouri. He charged admission to view the animals and he bought and sold animals with the Miller Brothers Circus. I wasn’t born until 1939 so only remember the stories and pictures of this part of my father’s life.

My dad took me to almost every circus that came within 100 miles of St. Joe. I guess that he knew most of the owners through his buying and selling of wild animals. Also during the depression he worked for a circus taking care of the animals, and my mother made cotton candy.

The two circuses I remember were “Miller Brothers” out of Hugo Oklahoma and the “Cole Brothers” Railroad Show. I remember the names of the Miller Brothers circus owners. There was Obert Miller and his sons Kelly and Dory. My dad was very good friends with the Miller family and I know had a lot of respect for their business operation. I think he had first met Obert when he started his animal farm in Kirksville. We always got the best seats in the house when we visited them; usually on the band stand next to the tents entry for the performers. Sometimes we would eat with the performers and crew members. This was quite an experience for me as a child to be that close to all those talented and interesting people from all over the world. We would usually arrive at the circus lot early in the morning to watch the elephants erect the huge tents. In just a few hours the former empty field at the edge of town was turned into a miniature city of tents, wagons, exotic animals and concession stands. Even after all these years I can feel the excitement and remember the smells and sounds of the circus lot. First I remember the smell of the fresh cut hay on the field and the animals in the cages. The sounds of the roaring lions and the elephants trumpet is still vivid in my mind. And of course the smell and sound of the popcorn machines. The cotton candy and candy apples were fun to eat but awfully messy.

One time we went to the Cole Brothers circus and my dad had business with the owner before the show started. The owner’s office was on a railroad car connected to another rail car housing a gambling casino just for the circus help. The owner gave me a hand full of nickels to play the slot machines while he and my dad conducted business. By thetime we were ready to leave I had won about $20.00. Since slots were illegal in Missouri at the time, none of my friends at school the next day, believed I had really played the slot machines the night before.